Catch of the day

When compared with the recent spate of massive fully electric and hybrid vessels to have either recently been ompleted (M/V Catriona, USS Zumwalt and Texelstroom) or those forthcoming (such as M/S Roald Amundsen, Color Hybrid and Enhydra), an electric fish farming workboat may not sound particularly revolutionary. However, in the case of Elfrida, which is officially the world’s first battery-powered vessel of its kind, Siemens, the company behind its propulsion system, believes this modest boat could actually drive vessel development well into the future. Why? According to Siemens technical expert Odd Moen, when it comes to providing food for the world’s ever-increasing population, the traditional fish capture market is flat-lining and aquafarming is going from strength to strength . “Take, for example, Norway, where aquafarming production has doubled in a decade to reach approximately 1.4 million tons,” he says. As such, Moen believes that Elfrida, which was put into operation off  the coast of Central Norway in March 2017  by native salmon farmer SalMar Farming, could be the first of many more electrically powered fish farming vessels to come.

Constructed at Ørnli Slipp in Norway, a shipyard known for its delivery of solidly built, aluminum aquafarming support vessels, Elfrida bears a distinctively sturdy shape designed to provide its crew with a stable working platform for the lifting, inspection and repair of fish hatcheries; checking of anchorage points; and for fish feed transport. So, while the vessel’s 13.5m length is arguably quite modest, it is exceptionally broad in the beam, measuring no less than 8m across.

It is equipped with Siemens’ BlueDrive PlusC propulsion system, which incorporates an energy management system, thruster  and propeller controls, and EcoMain remote monitoring. The electric propulsion technology, which was developed in Trondheim, means Elfrida can make the 12km journey between SalMar’s facility in Kattholmen, on the Island of Frøya, and its fish hatcheries, in around 50 minutes at a speed of more than 10kts. 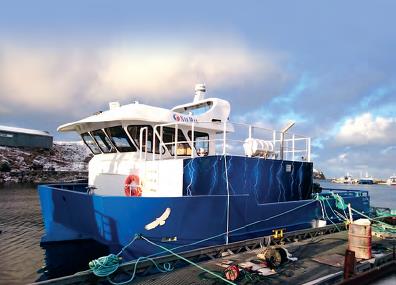 As well as being able to provide 100%  battery-electric operation throughout a normal eight-hour working day, another major benefit of the BlueDrive PlusC unit for this particular type of vessel is a complete lack  of maintenance compared with conventional diesel-powered fish farming boats.

“Once on-site, the vessels maybe travel for a few meters before stopping. They do that all day. And it’s this type of incremental movement, where the speed rarely reaches upward of 2-3kts, which is a killer in terms of diesel engine maintenance,” explains Moen.

“Here, diesel engines have to work for long periods at very low loads and power output. Combustion performance is low, as it’s the exhaust temperature, which is particularly terrible for the conventional diesel engine.”

He adds that this type of movement “is also bad for fuel efficiency and  not so great for emissions either”,  and reveals that the crew habitually took shelter from both the noise and smoke generated from the exhaust while working on deck. So, he says, the fact that “there’s no combustion engine, no maintenance, and no need to constantly feed the boats with diesel” creates a compelling argument for further adoption of electrically powered fish farming workboats.

Elfrida runs its day-to-day operations from a pair of 92kWh batteries, one in each hull. Recharging takes place overnight, however  an additional charge occurs in the afternoons during the crew’s lunch break thanks to the fish hatcheries having a grid connection that  runs from the shore, thus providing a nearby power point. This, says Moen, should give Elfrida any top-up it needs, although it’s also furnished with a 225hp genset to charge the batteries if longer trips are required.

While it can be argued that it’s a little excessive to apply to a small workboat the same rugged propulsion system utilized by much larger offshore support vessels and ferries, Siemens’s BlueDrive PlusC technology has been developed to make the most of onboard energy management, especially in vessels such as Elfrida, which incorporate battery systems with a variety of equipment.

For example, in the vessel’s wheelhouse, the dashboard provides information on the propeller power, how and where the energy  is being utilized, how much battery power remains, and how many hours of operation are left. Furthermore, the installation of the EcoMain monitoring system is invaluable in proving Elfrida’s environmentally friendly credentials. Designed to yield very accurate reports about the performance and condition of the vessel, Moen says he expects to see energy consumption savings “of between  70% and 80%”, which, considering SalMar Farming’s fishing fleet currently consumes 400 million liters of diesel each year, is a significant amount. 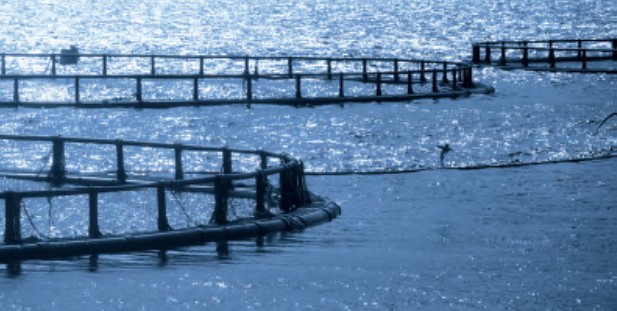 Delving deeper into the workings of Elfrida’s electric propulsion system, an inverter converts the DC electricity from the batteries into three-phase AC electricity, which in turn feeds a 160kW permanent magnet (PM) motor in each hull. Although more expensive than an induction motor, with a PM motor, the vessel’s speed can be directly controlled by a frequency converter. Furthermore, as a result of Elfrida’s moderate size, the motors can be connected to the fixed-pitch propellers without the need for a gearbox to step the RPM up and down.

And, particularly appropriate for those short maneuvers typical of aquafarming workboats such as Elfrida, Moen says that “these PM motors have high torque from  zero revolutions, rather than requiring a certain amount of input power to get above the inertia threshold.”

Therefore, the higher initial cost of the PM motors is balanced out due to the savings made by eliminating the gearbox, the smaller footprint and lighter weight of the vessel, as well as the fact that it is maintenance-free.

According to Moen, Elfrida’s influence on the aquafarming industry may even extend  to the deck kit. Until now, the cranes that are typically engaged in lifting the hatcheries for inspection and repositioning have been hydraulically actuated. However, these could eventually give way to newer electrically-powered versions, which, explains Moen, are “more energy efficient and faster to respond, with no potential for oil leaks”, as is currently the case.

And while Norway is undeniably proud of the fact that its government is committed to clean power generation and reducing CO2 by 40%, Moen acknowledges that, until now, this alone hasn’t been enough to satisfy companies who are, rightly, concerned with their bottom line. “The question has always been, ‘Can I make a profit and still reach my environmental goals?’ And I’d say, yes, you can now.”