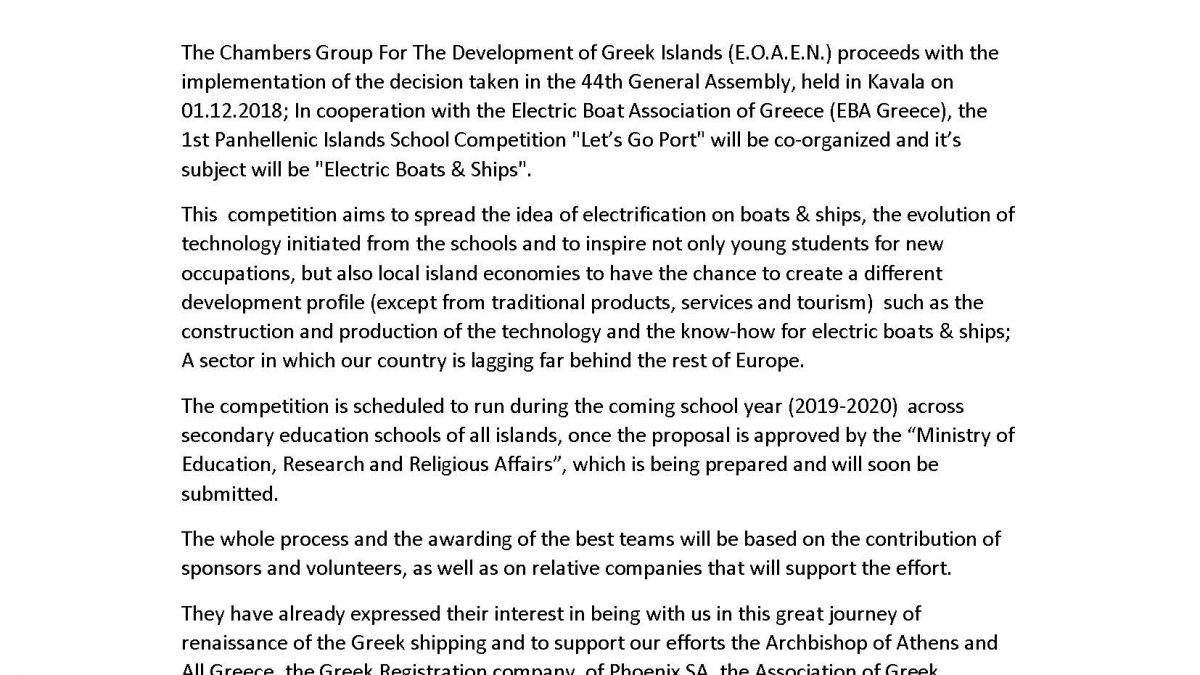 The Chambers Group For The Development of Greek Islands (E.O.A.E.N.) proceeds with the implementation of the decision taken in the 44th General Assembly, held in Kavala on 01.12.2018; In cooperation with the Electric Boat Association of Greece (EBA Greece), the 1st Panhellenic Islands School Competition “Let’s Go Port” will be co-organized and it’s subject will be “Electric Boats & Ships”.

This competition aims to spread the idea of electrification on boats & ships, the evolution of technology initiated from the schools and to inspire not only young students for new occupations, but also local island economies to have the chance to create a different development profile (except from traditional products, services and tourism) such as the construction and production of the technology and the know-how for electric boats & ships; A sector in which our country is lagging far behind the rest of Europe.

The competition is scheduled to run during the coming school year (2019-2020) across secondary education schools of all islands, once the proposal is approved by the “Ministry of Education, Research and Religious Affairs”, which is being prepared and will soon be submitted.
The whole process and the awarding of the best teams will be based on the contribution of sponsors and volunteers, as well as on relative companies that will support the effort.

They have already expressed their interest in being with us in this great journey of renaissance of the Greek shipping and to support our efforts the Archbishop of Athens and All Greece, the Greek Registration company of Phoenix SA, the Association of Greek Physicists who will compose and our link with the schools, ERT S.A, our national TV Station, STA.SY. SA , ATTICA GROUP, EL.TA. , Μ.Ε.Κ.Υ. , the Port Facility of Lesvos, the Ierapetra Port Facility and many more are still under discussion.

The EBA, the oldest Electric Boat Association in the World, endorses this programme 100% and she will be there in brotherhood and solidarity.

For EBA Greece
The President
Andreas I. Apostolopoulos