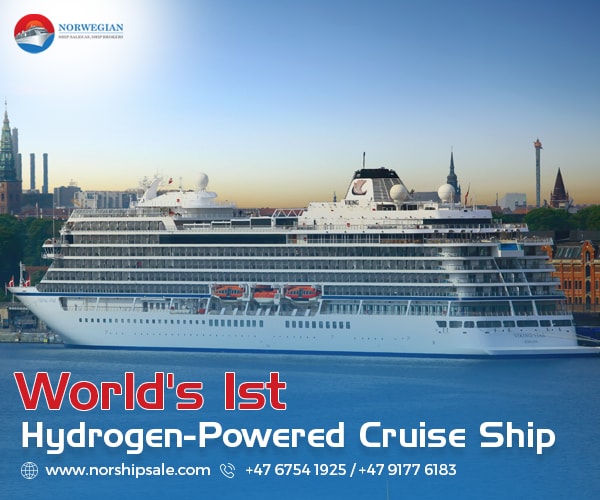 With the developments and innovations that are taking place in the shipping industry, caution must be taken to care for the marine population that is being subjected to the adverse effects of shipping. Harmful emissions and waste materials that are discharged every time ships set sail are known to deplete the resources and cause damages of huge proportions to the aquatic life. So much so that the question regarding the ethical nature of transportation via sea has been brought under the spotlight.

Cruise activities are known to cause damages to the delicate ecosystem due to the high level  of hazardous substances that are present in the waste. Not only is the biodiversity harmed by these emissions but the quality of the water too gets greatly affected by the fuels.

Viking Cruises, to combat these untoward consequences that are tainting the shipping industry is all poised to come up with the world’s first cruise ship that guaranteed zero emission. Serge Fossati, who is the project manager at this prestigious shipping company has come forward with his plans at the Norwegian Maritime Authority’s Safety at Sea Conference in Haugesund of having a cruise fuelled by liquid hydrogen. The ship would be around 230 metres long and is predicted to accommodate around 900 passengers and a crew of 500 members.

The Viking Cruises some of the prestigious ships that are put up for sale in Norway are looking to build a ship that is modelled on a similar design as the other seagoing cruise vessels, not unlike the recently launched Viking Sun. The shipping company also informed that the hydrogen ship when it would reach completion would be registered under the Norwegian Ship Registers and the fact is already being considered in talks with the Norwegian Maritime Authority.

“This is a world sensation. Very exciting. If they pull this off, a distribution network may be established, which will enable others as well to use hydrogen as fuel, and could contribute to a zero-emission shipping industry,” Olav Akselsen, Director General of Shipping and Navigation said.

The reason that liquid hydrogen had not been in use as a fuel to run marine vessels is because of the technical challenges that require the fuel to be maintained at 253 degrees so that it does not easily evaporate. The fuel cell now would convert the hydrogen into electricity that would further be used for propulsion and to successfully run electricity on board. Currently, liquid hydrogen is not being produced in large quantities in the European continent but according to the project manager, the shipping company of Viking Cruises is in conversation with Statoil to find a sound solution that is based in Norwegian refinery. According to the reports, the shipping company is also looking to use Norwegian suppliers for the completion of the project as much as is possible. The project is also incorporating a number of tender ships to carry the fuel to the cruise ship.

“As a Norwegian and with Norwegian ships, we want to lead the way to zero-emission ships through fuel cell technology. The road to that point is still long, but here at Viking we want to be ahead of the game,” Torstein Hagen, Chairman of Viking Cruises said.

Norwegian Ship Sales AS, one of the leading ship broker companies in the Norwegian circuit have a detailed inventory of all the upcoming ships and vessels that are poised to be launched in the coming years. Enlist their services at the earliest if you are interested.